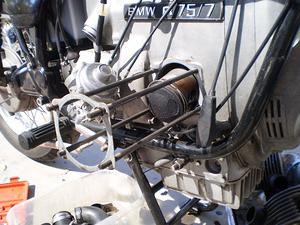 I've made progress on the Beemer's to do list over the past month! My friend Paul introduced me to his friend Tom a month ago. Tom's an engineer, a former Mercedes mechanic, and owner of several toys, including several motorcycles. Best of all, Tom's a patient man who offered to show me how to pull the jugs on my R75 to replace the leaky pushrod tube seals.

I more or less followed the Scot Marburger's instructions, with a few extra tips from Tom. The cylinders looked to be in really good shape–Tom said they looked pristine. I did strip a bolt on the right cylinder head during reassembly which Tom was able to fix with a helicoil. The bike started right up after putting her back together and ran like a champ all the way up La Bajada Hill. I roder her up to the Santa Fe Ski Basin last weekend and she ran great.

I couldn't be happier with this bike right now. 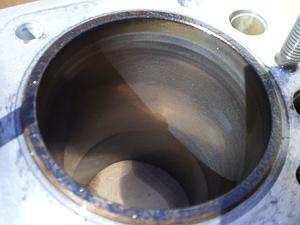 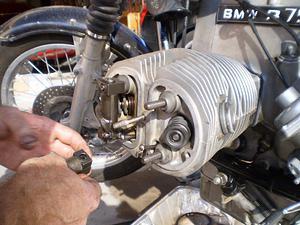 It took three ebay purchases before I finally had a suitable replacement front brake lever. Sheesh! Tom drilled a small hole under the gas tank top handle and inserted a pin which locks the top and threaded cylinder in place. It's soooo much easier gassing the bike up now!

I purchased a used tail light housing unit from Re-psycle and put it on last weekend. Mark at Re-psycle was super helpful and knows his stuff.

Next on the list is fixing the instrument cluster. Tom and Paul mentioned that there's a place called Mo-ma in Albquerque that specializes in the repair of gauges and instrument clusters. I'd also like to get a set of BMW or Krauser panniers, so it's back to ebay!