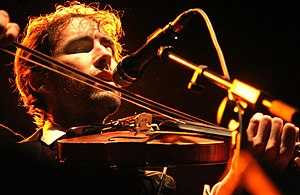 The boys and I saw Andrew Bird last week in his first concert here in Santa Fe. The shows at The Lensic always sound great and this was no exception. As we walked back to the car after the show, Owen commented on how his ears weren't ringing like they were after we saw Rush, and I could hear what he was saying perfectly well. I now have a strong preference for seeing quieter artists in smaller venues, and this show reinforced this bent further.

Andrew, the consumate whistler, was challenged by the thin air here at 7,200 feet. Fortunately, he paced himself, took time to hydrate, and completed a great two hour set. When he was done, he looked a hell of lot healthier than the weathered and worn Todd Rundgren, who I'd seen a few weeks earlier.

The stage was lit with slowly morphing primary colors. Three intricate polygon spirals slowly spun above the stage projecting shadows alongside silhouettes of the band on the expansive white backdrop. Andrew's trademark two-headed phonograph horns sat spinning upon amplifiers at the center of the stage behind the band.

Andrew didn't speak much, just a few comments here and there. He did comment on how subdued the audience was, but apparently we weren't as comatose as the crowd in Mesa, AZ the night before. Andrew's music attracts a calm listening audience who won't jump up to dance when he plays one of the few upbeat songs from his catalog, like "Break It Yourself."

I've know that Andrew makes extensive use of playback loops, but didn't fully appreciate his mastery of them until seeing him use them on stage. He started the show alone playing and recording a pizzicato rhythm on his violin, then playing the recording back on loop while layering a bow-played and whistled melody over the rhythm. Owen and Ryan were both impressed by Andrew's ability to whistle and play a xylophone in unison.

I had hoped to hear Darkmatter, Tenousness, and one of my favorites, Natural Disaster, but these didn't make it into the set. I really enjoyed hearing "Effigy", "Scythian Empires", "Give It Away", "Fatal Shore", and a fun cover of "Bein' Green." What I enjoyed the most was the band gathering around a single microphone to play bluegrass and blues covers.

I believe this is the set list, same as what he played in Mesa, AZ the night before. If you like Andrew and haven't seen him, I highly recommend catching one of his shows.